These articles, intended for the uninitiated as well as for the practitioners, remind some basic but nevertheless essential points for a good practice.
We particularly thank Yassine who is the initiator and author of the first articles.

The origins of Aikido 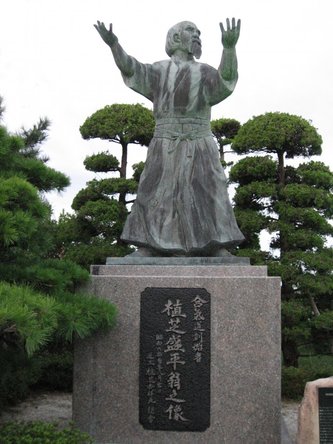 
Ô Sensei Morihei Ueshiba (1883-1969) is the founder of Aikido. After mastering various fighting arts, he devised his own techniques that did not depend on physical strength, but rather on circular movements mixed with the energy of the attacker. ô Sensei established that true victory is not found in defeating one's opponent but in resolving the discord. He therefore developed an art that allows one to get rid of a nuisance without necessarily inflicting any damage on the aggressor.

The word Aikido in Japanese is made up of three kanji. "Ai" means "to meet, to gather, to harmonise"; "Ki" means "energy, spirit" (in a wider context, "Ki" can mean "the spirit of nature", or "of the universe", so not only "the spirit of the human being"). "Do" means "the way, the path". The study of Aikido is therefore not simply a learning of self-defense techniques but includes a positive construction of oneself to be incorporated into one's daily life. AIKIDO can be translated as the way to harmonise with the spirit of the universe.

Ô Sensei developed aikido in the late 1920s until 1930 as a synthesis of the arts he had studied. The main martial art from which aikido is derived is Daito-ryu Aiki-jujutsu, which Ô Sensei studied with Takeda Sokaku. Alongside this, Ô Sensei studied other arts such as judo, Gotoha Yagyu Shingan-ryu and Tenjin Shin'yo-ryu.

It is considered that it was around 1937 that Ô Sensei started to distance himself from Takeda Sokaku. The martial art taught by Ô Sensei was then called "Aiki Budo". In the following years, this term was transformed into "Aikido", and was made official in 1942 during a reorganisation and centralisation of Japanese martial arts by the Greater Japan Martial Virtue Society (Dai Nippon Butoku Kai).

Besides the martial aspect, Ô Sensei was also deeply influenced by Onisaburo Deguchi, spiritual leader of the Omoto-kyo religion. It is this influence that gave Ô Sensei's martial arts philosophy its aspect of love and compassion. In aikido, a practitioner could ideally receive an attack and redirect it without even hitting the attacker.

Aikido in our countries

Minoru Mochizuki was the first to introduce Aikido techniques in Europe. During a visit to France in 1951, some judoka had the opportunity to be introduced to these techniques. Tadashi Abe followed in 1952. He arrived as a representative of the Hombu Dojo, and stayed in France for 7 years. In the years that followed, Aikido spread to all continents. Today there are Aikido dojos all over the world. The late Seiichi Sugano Sensei, well known in our country, was initially sent to Australia in 1965 to teach Aikido, which he did for 15 years. At the request of the late Nobuyoshi Tamura Sensei, Sugano Sensei moved to Europe, specifically to Belgium, France and Luxembourg. In 1988, Sugano Sensei moved to New York where he became a teacher at the New York Aikikai with Yoshimitsu Yamada. 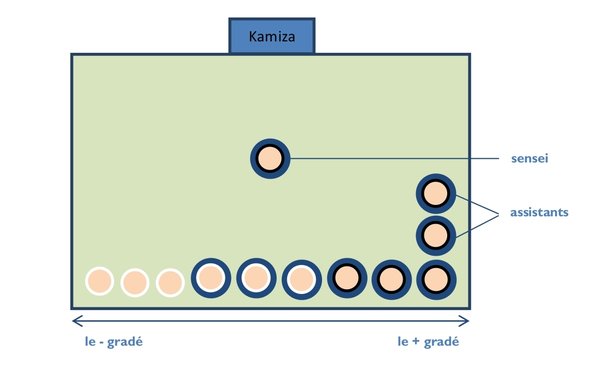 It's back to school time for the young people, it's a new season of Aikido that starts for the practitioners. If for some there has been no break in practice, for others it is necessary to restart the machine. With this objective in mind, I offer you the second Ren Shin Kan chronicle. This one will, I hope, allow us to get back into the swing of things. I have chosen this time to remind you of the principles of etiquette in Aikido, an element that is inseparable from a good practice.

Etiquette is simply a set of rules of correctness aiming at guaranteeing the good progress of an activity. We are obviously talking here about those that apply to our Aikido practice, but it is interesting to remember that our way of life is (or should be) governed by an etiquette adapted to each situation we may encounter. The way we greet each other, the way we converse, the way we dress depending on where we intend to go,...

Each martial art has its own etiquette. The one that interests us in this chronicle is that of Aikido. As in other budo, the etiquette will make it possible to preserve a respect between practitioners as well as towards his Sensei.

The structure of the aikido dojo is that of the traditional Japanese dojo.

The adjacent diagram illustrates the traditional position of the practitioners during the opening and closing ceremony of a class. In practice, during an ordinary class, it is usual to see the assistants on the same line as the practitioners. As you can see, the practitioners are positioned from left to right in ascending order of rank.

Sitting on the tatami is done in seiza position. This position is achieved by kneeling with the feet flat and weight on the heels. The big toes can overlap. The back should be kept straight and the hands at mid-thigh. The knees should be about two fists apart for men and one fist for women. This position limits the effort required from the knee ligaments. To get into the seiza position, the left knee goes down first, while to get up from this position, the right knee goes up first. This is explained by the fact that the sword is carried on the left side. It is very difficult to draw the sword with the left knee raised.

There are two main bows in Aikido : standing and sitting. The standing bow is performed by staring at the place or person to be saluted, tilting the bust forward about 30°, with the back straight, and then returning to the initial position. The hands are usually at the side of the body. Women sometimes salute by letting their hands slide to their knees. The seated bow starts from the seiza position. From this position, the left hand should be placed in front of the body first, with the thumb open. The right hand then joins it to form a sort of triangle, symbolising unity and balance. The bust is then inclined to place the face in the heart of this triangle. On the way back, the right hand returns first followed by the left hand to the initial position.

Grade transitions are moments in the practice having a specific etiquette.

One of the important points of this etiquette is the choice of partner. There are two practices. The first is that the student takes the exam with the highest ranked practitioners, so that the movements are not influenced by the quality of the uke. If this practice is used, it is the high ranked practitioners who present themselves, or the Sensei who designates them. The other practice is to take the exam with a partner who has the grade to which one aspires, or the closest to that level. In this case, the examined student must go and greet the practitioner, if he is not designated by the Sensei. For the federal Dan exams, the student chooses a practitioner from his pool for the first part (suwari waza and hanmi handachi waza) and another for the second part (tachi waza). The first will then return for the weapons and both will be present for the randori.

The second point is the positioning and the bow. When called, the student should greet his or her partner, pick up his or her weapons, place them generally on the side of the mat with the blade and point furthest from the jury and/or kamiza. The student must then sit to the left of his partner, facing the jury. Both students bow to the Jury and then to each other. These positions will be repeated at the end of the passage. The student will not forget to take back his weapons before returning to his/her place.

Here is a summary, probably not exhaustive, of the rules of etiquette :
Some rules for spectators outside the mat :
If this list seems long to remember, most of it is acquired with practice. The higher ranked practitioners are there to guide you and remind you of the points of this etiquette. They will allow everyone to know the etiquette well and thus to perfect their behaviour during practice.